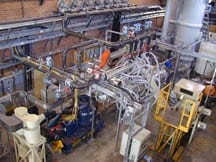 In 1999, PyroGenesis won a bid to become the US Navy’s partner in the development of a compact, simple to operate waste destruction system for the CVN 21 programme for their future generation aircraft carrier. Over the following decade, our team worked hand in hand with US Navy personnel on developing and refining the technology for commercial deployment on what is now know as the Gerald. R. Ford class of aircraft carrier.

A 60-day test on the EDM equipment in Montreal was performed by sailors from the CVN-70 USS Carl Vinson. Based on the success of this work, the US Navy decided to specify PAWDS into the design of all of the Ford Class ships. Two PAWDS have been ordered to date by the Navy’s prime contractor, Newport News Shipbuilding (CVN-78 USS Gerald R. Ford, CVN-79 USS John F. Kennedy).