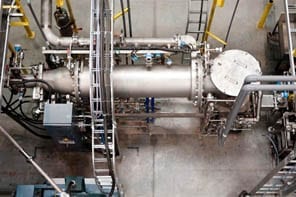 PyroGenesis was engaged to design, build, test and then deliver the world’s first plasma destruction system for marine use. The US Navy, after working with PyroGenesis for many years on the development of the PAWDS technology, specified the system into the ship. The US Navy sought to have a highly compact, sailor-friendly means of destroying waste out at sea, as an aircraft carrier can be out for many months without coming to port.

Our team conducted successful Factory Acceptance Testing (FAT) in May 2011 in Montreal. The equipment was then refurbished, packaged and as a result, the first commercial PAWDS was delivered to the shipyard on time and within budget later that year.